Jeep is the pride of Americans for off-road lovers. Up to now, the Jeep brand has been around for 78 years (1941 – 2019). It comes from the Willys MA used in the military to civilian models such as today’s Wrangler, Grand Cherokee, or Renegade.

Jeep Wrangler 2018 – 2019 is a famous off-road vehicle for its ability to operate flexibly on all terrains. However, its appearance is not very attractive, and the price of the car is moderate at more than USD28,000. 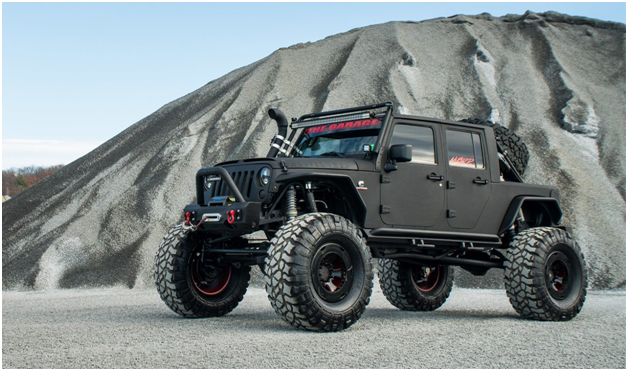 How to turn your Jeep into a real off-road monster?

To increase the appeal of this vehicle, a truck company called Jeep Wrangler has upgraded and released a unique version called Black Hawk Expedition.

The old car color of the Wrangler Sport comes with a 3D Green texture paint that has a vibrating military color. However, the eye-catching color is not the only change. The Black Hawk Expedition also comes with many modifications, including the hood front bumper, and fender placement. Otherwise, the hood also has refitted the 4-slot grille vents.

Besides, upgrade your Jeep Wrangler with tires and rims designed for off-road to increase ride height and ground clearance, allowing it to tackle back deep mud or larger rocks. 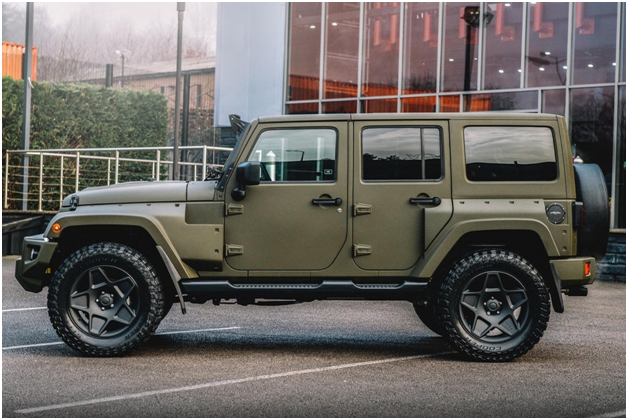 At the front of the car, an LED daytime running light is also installed in the additional air intake in the front fender. The front fuel filler cap is finished in satin black. Spare wheel covers and lifting kits are also changed to match the color of the vehicle. The 20-inch Mondial Retro scroll wheel is painted with satin black 3D paint.

Other ways to custom your Jeep

1. Jeep Wrangler custom made by students

Recently, a group of high school students in Virginia (USA) surprised most of the global Jeep enthusiasts. This group of students introduced a beautiful version of the Jeep Wrangler.

The 2002 Jeep Wrangler Sport was completely redesigned by a group of students from CD Hilton High School in Woodbridge, Virginia, USA. The car is upgraded with a series of new features. For example, the engine suspension, exhaust pipes, and tires are made of stainless steel and LED lights run along the side of the car.

The car has been upgraded with many entertainment features such as USB technology, radio, and Bluetooth. The car’s original 4.0L 6-cylinder engine remains the same.

From the Jeep Wrangler Unlimited, Hauk Design has created a real “monster” with six wheels. The car had a 3-wheel drive and was powered by a steam engine. This version is called Loco Hauk. The most impressive feature of the car is that instead of using a traditional gasoline internal combustion engine. Loco Hauk works with a 4-cylinder steam engine arranged in a V shape with a capacity of 1.6l.

This engine was designed and manufactured by Charles Kean for the circa 1960 Keen Streamliner 2 locomotive with a 180-degree crankshaft angle between each cylinder. This engine only produces a maximum capacity of about 140 horsepower. However, there is an enormous torque, up to 3389 Nm. Loco Hauk can reach speeds of about 100km/h. It works best with a steam pressure of 800 PSI.

In place of the rear seats on the original Jeep Wrangler is a 208-liter water tank. Supply water to the kettle with a volume of 75.71 liters. With steam pressure of 500 psi and a speed of nearly 60km/h. The car can only go about 2.5km with 75 liters of water. Along with that, the tuner also changed the 4-wheeler to 6 wheels. The wheelbase length is up to 4.19 m. All six wheels come with Grid Off-road GD-1 wheels.

In April 2016, the JKUS tuning company launched a new 6-door Jeep Wrangler version. With this version, JKUS company almost keeps the off-road equipment. However, the lengthening of the car has made every sitting position much more comfortable. The car also owns attractive bright blue Forgiato rims. Contrast with the overall matte black paint.

With three rows of seats (two of which are benches), the unique Jeep model can easily take on the role of a bus. Although still maintaining all the original terrain conquering features. According to initial information, the car belongs to Swat Motorsports (Las Vegas, USA). However, it is unclear what this unit aims to use this vehicle for. Netizens also said a similar one appeared in Texas. It is not flashy but has a big HEMI engine block.

In 2015, a Jeep Wrangler was customized. The car was created from boxes on Canada Day (July 1). Immediately upon its release, it made a powerful impression. In celebration of this 1/7/2016, the FCA Canada branch launched a similar product to parade through the streets of Vancouver. This Jeep is made from 5,000 food cans that are still in use thanks to many students, scouts, and Canstruction. Canstruction is a non-profit organization specializing in the recycling of bottled products.

This unique car is on display at the West Coast city pier for the 149th anniversary of the Canada Day event. Soon, the Jeep Wrangler will be dismantled. The boxes will go to local food banks. It will serve 3,500 meals to those in need.

5. The jeep has an extreme off-road ability.

In Vietnam, in May 2019, a car workshop in Hanoi also completed the off-road upgrade package for the 2008 Jeep Wrangler Rubicon. According to the representative of this tuning workshop, the cost of completing the tuning project. All Topfire front and rear bumpers are made of aluminum alloy and are custom made. The front bumper only hugs the front of the car but does not hug the two wheels.

It increases the look of the bunker and increases the ability to go off-road. Besides the exterior exteriors that increase the aggressive look, the workshop also improved the air filter, and remapped the ECU and the exhaust system. The workshop took 45 days to complete the 2008 Jeep Wrangler Rubicon custom project.

Is it enough to make you know how to turn your Jeep into a real off-road monster? With eye-catching designs like these, everyone will be attracted and want to own such a car.